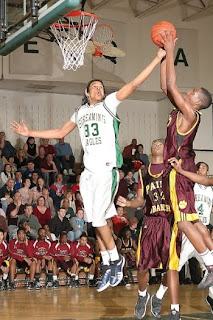 There are plenty of questions about Jordan Goodman’s high school career, from where he will play next season to what class he will graduate with. Now, his college destination is up in the air, too.

After committing to Georgetown in March, Goodman has decommitted from the Hoyas.

“As of right now, he’s opened it back up,” DC Assault coach Bruce Shingler said.

The primary reason for the 6-8 forward’s decision was Georgetown assistant coach David Cox moving to Rutgers.

“That was Jordan’s guy, you know, Jordan was his recruit,” Shingler said. “He just liked coach Cox, wanted to play for Coach Cox. He made a commitment to Dave Cox.”

A source close to the situation was more emphatic about the next move for Goodman.

“The kid is close to Dave Cox,” the source said. “[Goodman is] going to Rutgers.”

Goodman played last year at Progressive Christian Academy, but will not return to the Temple Hills, Md., school next season.

“I’ve heard that the school is going to cut the athletic program as a whole,” Shingler said, before adding that it was unclear which school Goodman would attend in the fall. “We haven’t really sat down and had the Jordan Goodman roundtable discussion yet.”

The news was first reported by Scout.com.