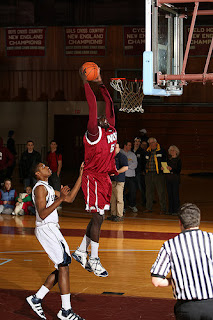 As first reported by me on Twitter (@jeffborzello), senior Majok Majok has committed to Fairfield.

Majok, a 6-7 power forward from Northfield Mount Hermon School (Mass.), visited the campus on Tuesday and made his commitment.

“Majok Majok is a Stag,” a source close to the situation said in a text message.

“Playing time right away,” Carroll said when asked why Majok chose Fairfield. “[We] think they’ll win the league and play in the NCAA [Tournament. [Plus, it’s a] great education.”

Majok also considered Georgia Tech and Boston College before deciding on the Stags. Colorado, Alabama, Oklahoma, UTEP, Valparaiso, Oregon, Saint Louis and Penn State were also in the mix at one point or another during the recruitment.

He got a late start on the recruiting process because of an ear problem that made it impossible to get on an airplane.

“He had ear surgery a few weeks back,” Carroll said recently. “He hasn’t been able to get out and visit.”

Majok, who came over from the Sudan in 2008, has quietly improved his game and became a guy who can make an immediate impact at the next level.

“He’s tremendous to coach,” Carroll said. “I’ve never coached a player who will do exactly what you say as much as Majok. He’s incredibly athletic. He put up numbers against some of the top players in the country, and I don’t think it will be different [in college]."