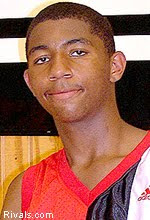 Josh Turner has not received as much publicity as some of his New England counterparts over the past few seasons, but he has not lacked for college interest.

When we spoke to Turner in January, he had offers from Rhode Island and Niagara, with interest from Connecticut, Massachusetts and Xavier.

The 6-5 swingman from Sacred Heart High School (Conn.) has yet to pick a school, though.

“I’m still in the process of deciding what school,” he said. “A couple of Big East, ACC, C-USA schools [are showing interest], but everything is still pending right now.”

Turner is still waiting on his test scores, and will choose a destination once he gets them back.

“I’ll let you know something soon,” he said.