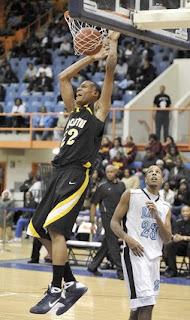 The Notre Dame Prep (Mass.) product had originally chosen Connecticut in November, with the Blue Demons as one of the finalists. However, Melvin decommitted back in early March after a disagreement about his role with UConn.

“He wanted to play the three, and they looked at him as more of a four,” said Anthony Lewis, Melvin’s former AAU coach with Cecil Kirk. “There’s absolutely no hard feelings between the two.”

This time around, Melvin chose DePaul over Marshall and Rutgers.

“They’ve been around, been recruiting him the longest,” Lewis said. “He liked the coaching change with [Oliver] Purnell coming from Clemson to DePaul. I think he likes the playing style and that he can come in and make an immediate impact.”

Lewis said that there wasn’t anything bad about Rutgers and Marshall that led Melvin to choosing the Blue Demons; it was simply that DePaul is the ideal situation for Melvin.

“I don’t think there was one thing,” Lewis said. “It was a combination of the factors together: the new head coach, the fact that they had been around. It wasn’t the lack of recruitment by either of [Rutgers and Marshall].”

Melvin is a very athletic forward who can finish at the rim and is highly effective in transition. While he does need to develop more of a well-rounded offensive game, his natural athleticism allows him to defend well and guard multiple positions.

Lewis said that Purnell was excited to hear about Melvin’s commitment, and that DePaul envisions him as a combo forward who can be a match-up problem on the wing and in transition.

“I think he was generally pretty happy,” he said. “They expressed the same type of role that I described.

“He’s a perfect fit. I think there’s a possibility that he can be rookie of the year.” 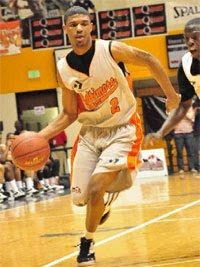 - Senior Antoine Myers is scheduled to visit UNC-Wilmington, and has already visited Rutgers and Marshall. After that, Myers will make an assessment regarding his recruitment, whether to choose from those three schools or take additional visits. “He wants to step in and be an immediate impact guy,” Lewis said.

- Junior Durand Johnson, from Lake Clifton (Md.), has a lot of ACC, Big East and Big 12 interest at this point. Lewis said that Johnson plans on taking unofficial visits to Pittsburgh, Virginia Tech and Maryland. “There’s so many of them, I don’t want to make it seem as if there’s a leader,” Lewis said. “He really hasn’t had an opportunity to think about it yet.”

- Miami (Fl.) transfer Antoine Allen is looking at Marshall, Arizona and UNC-Wilmington as his next destination. “He was just looking for a better fit,” Lewis said. “He wants to make a major impact at his next school.”