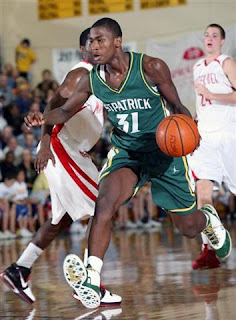 A report at BoxofMess.com early Friday afternoon claimed that Michael Gilchrist, the top-ranked player in the class of 2011, would be leaving St. Patrick (N.J.) and transferring to Camden Catholic (N.J.).

“No,” Brown said when asked if the report was true.

Aside from Camden being closer to Gilchrist’s home, it seems strange that he would leave one of the perennial powers in high school basketball.

Gilchrist, a 6-foot-7 forward, is committed to Kentucky.