Perry Ellis shines on and off the court 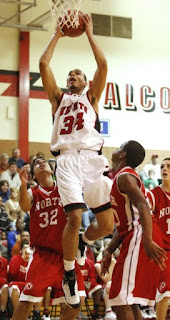 Whenever Bill Self, John Calipari and Rick Pitino show up to watch one player perform in an open gym, you know you are dealing with someone special.

Special is just one word to describe Perry Ellis, a 6-foot-8 forward from Wichita Heights (Kan.). One of the top players in the class of 2012, Ellis is one of the most highly-recruited prospects in the country. He was named the ESPN Rise National Sophomore of the Year, and has been the Gatorade Player of the Year in Kansas for the past two seasons. Moreover, Ellis averaged 22.2 points and 10.4 rebounds en route to leading Wichita Heights to its second consecutive state championship – the first back-to-back 6A state champ in 16 years.

“It was really impressive to have that many coaches there at one time,” said Perry’s mother, Fonda Ellis.

Therefore, it comes as no surprise that Ellis has offers or interest from nearly every big-time school in the nation.

To read the rest of this story, check out the NBE Basketball Report.