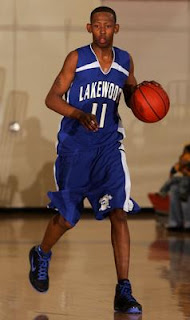 Although most of the top players in New Jersey are consolidated in the northern part of the state, junior forward Jarrod Davis has garnered plenty of high-major looks playing for Lakewood (N.J.).

On Thursday, he informed the NBE Basketball Report that he has trimmed his final list to Seton Hall, Tennessee and Georgia Tech.

“Those are my final three,” Davis said, before adding that Georgia Tech and Seton Hall have a lead right now.

He will visit Seton Hall this weekend, and also plans on seeing Georgia Tech before the July recruiting period and Tennessee before he makes a decision. With that said, though, he’s not afraid to pull the trigger on making up his mind.

“If I like one of the three while I’m there, I’m letting it be known I’ll commit,” he said. “Playing time as soon as I get there is a definitely a major factor. Also academics. Somewhere that can help and prepare me for life after basketball is over.”

Davis broke down what he likes about each school.

“Just all the staffs have great coaching staffs,” he said. “Georgia Tech coach [Paul] Hewitt has been recruiting me since last summer. He was at all my games; that meant a lot.

“And Seton Hall, another good coach in coach [Ralph] Willard, who was under coach [Rick] Pitino at Louisville and has a great staff alongside him with coach [Dan] McHale and Shaheem Holloway. I have been hearing from them a lot since they have gotten there and it’s close to home.

“And Tennessee coach [Bruce] Pearl contacted me himself; that meant a lot to me and they were one of the first schools to send me my first recruiting letters and stayed with me.”

Davis is looking to play in a fast-paced system where he can utilize his skills to their potential.

“The thing I like about all three, they play an up-tempo game, getting up-and-down and that fits me,” he said. “I love to run and I’m very athletic.”

Nonetheless, Davis is not positive when he will end his recruitment.

“No timetable,” he said. “Whenever I feel the time is right and I’m exact on my decision.”