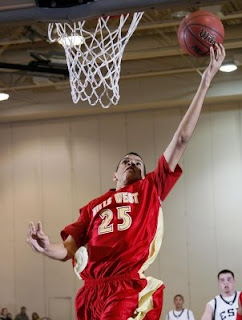 When former top-10 recruit and Tennessee signee Tobias Harris is your older brother, it is often difficult to follow in his footsteps. As a result, 2011 prospect Tyler Harris was often simply known as “Tobias’ brother.”

However, with his play on the AAU circuit so far this season, he is starting to build his own reputation.

“He’s right on schedule like Tobias,” said their father, Torrel Harris. “The difference between Tobias and Tyler is that Tobias is physically stronger. Tyler is growing so fast and his eating habits are starting to get better. Tobias, for two years, ate no junk, just good food. For Tyler, six months ago, his dinner was cookies and milk.

“Within the last three months, he’s realizing ‘this is my time now,’ and he’s eating three good meals, taking vitamins, working out three times a day. Once Tyler gets his strength, he’s going to be a major, major problem.”

To read the rest of the article, check out the NBE Basketball Report.