Connaughton calls it for Notre Dame 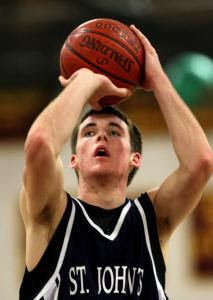 Patrick Connaughton did not have a Division-I basketball offer prior to July. On Saturday, he completed his meteoric rise with a commitment to Notre Dame.

Connaughton, a 6-foot-5 swingman from St. John’s Prep (Mass.) who played on the AAU circuit with Middlesex Magic, is also a star baseball player. He said his ability to play both sports at Notre Dame contributed greatly to his decision.

“It just was the right fit. It has the best of all worlds – academics, basketball and baseball,” he said. “Those three are what I want and they have it all and are perfectly fine with me playing both sports so that was huge. And when I figured that out, I wanted to make the decision and get it over with.”

Before Connaughton blew up at the AAU Nationals in Florida, there was little chance he would be committing to play basketball at a high-major school. In fact, Notre Dame was the only team that even keeping an eye on him.

“I honestly had no idea,” he said. “I could have ended up going somewhere for baseball if it didn’t work out. Or maybe Harvard or Princeton would have been the right fit.”

Connaughton is also excellent in the classroom, as he sports a 3.6 GPA and is a member of the National Honor Society.

Balancing two sports and academics might be difficult for some, but Connaughton does it just fine.

“That’s because my parents brought me up that way so it’s become second nature,” he said of his focus on academics. “I’m more focused on the sports aspect.”

On the court, Connaughton is a tough player with solid athleticism and a versatile offensive game.

“Hard work, playing smart and the competitive nature to win,” he said when asked what he brings to the table. “If you can’t win, then it’s no good.”

Head coach Mike Brey’s hard work paid off with Connaughton, and he had to be excited about his first 2011 recruit.

“I think he was happy,” Connaughton joked. “I hope, at least.”