Rutgers picks up another one 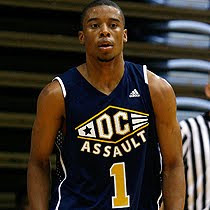 Rutgers has been recruiting two basketball hotbeds – Washington D.C. and New York – very heavily in the spring and summer, and it continues to pay off.

On Tuesday, a third player from the DC Assault program committed to new head coach Mike Rice, as Jerome Seagears popped for the Scarlet Knights.

“It was the right time, it was a great situation, and I felt confident with the coaching staff,” Seagears said.

“I was always looking forward to being part of a highly-ranked recruiting class,” Seagears said. “Just because with Mike Rice, with his passion and motivation, he’s going to be successful. And athletes want to be successful, too.”

Seagears, who chose Rutgers over Cincinnati, is a physical and athletic 6-foot-2 guard from Flora MacDonald Academy (N.C). He can play both guard positions, and is an effective playmaker and tough defender.

He said his relationship with Rice and assistant coach Dave Cox were the biggest factors in his commitment.

“They really did a great job recruiting me,” Seagears said. “I had a great relationship with the coaching staff, from Mike Rice to Dave Cox to the managers.

“[Cox] is from the DC Assault program, so he’s family to me. I’ve known him a long time. But I have a great relationship with Mike Rice too.”

Although Rutgers has struggled mightily in the Big East the past several years, the influx of talent could give the Scarlet Knights a chance to compete in the conference.

The addition of Seagears is another piece to the puzzle.

“[Rice] just kept saying ‘You are the man.’ It made me feel great. The love is there.”