Thompson down to two 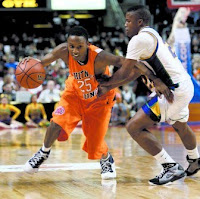 Sam Thompson leaped – literally – onto the national scene about a year and a half ago, but the high-flying forward is close to a college decision.

Thompson cut his list to two schools on Tuesday, saying he will decide between Ohio State and Florida.

The 6-foot-6 Whitney Young (Ill.) product also told me via text that he is no longer considering Oregon State, which he originally planned to visit in October. Moreover, he had planned to visit Georgetown, but the Hoyas are out of the mix too.

“It was good,” he said. “I really enjoyed myself.”

As for Florida, Thompson will check out the Gators the weekend of October 9.

“I don’t completely know,” he said. “I may reschedule to an earlier date.”

Thompson won’t make a decision until he takes his trip to Gainesville.