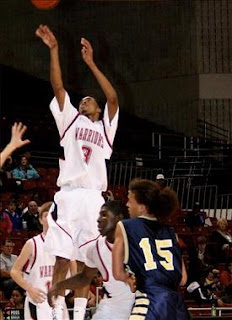 Rashad. That’s all it is: Rashad.

“I go by Rashad,” Rashad “Ky” Madden said Tuesday. “My middle name is Kytel so people have been calling me that my whole life. But I want to go by Rashad.”

The coaches of Baylor, Mississippi and Arkansas better be prepared to call him by his real name on Wednesday, when the highly-touted prospect will announce his college destination.

The 6-foot-5 combo guard from East Poinsett County (Ark.) is looking forward to getting the process finished.

“When I come back to school, I have a lot of work to make up, so my mom wants me to get it over with,” Madden said. “So I decided I’m going to go ahead and announce on Wednesday.”

He visited Ole Miss this past weekend, Arkansas the previous weekend and Baylor the weekend of September 11. Madden decided to cancel his planned trip to Connecticut, and will not visit Oklahoma State – the other two schools in his top five.

Each of his final three schools has something in its favor heading into the final 24 hours of Madden’s recruitment.

Baylor: “My sister [Jordan] goes there, they have good facilities and I like their coaching staff.”

Mississippi: “It’s close to home, the coaching staff is real good, and I can play immediately. I also like their style of play.”

Despite the location of Mississippi and Arkansas, he says that distance will not be much of a factor. Furthermore, even though AAU teammates Hunter Mickelson and Aaron Ross are committed to Arkansas, Madden said that will not make much of a difference, either.

“I’m looking for playing time, coaching staff and style of play,” he said. “I also want to play immediately.”

Madden is a versatile guard who is long and athletic and can do a variety of things offensively. He is not a true point guard at this point in his development, but he projects as one at the college level as long as he tightens up his handle and improves his passing.

“I’m a good player, a hard-working player,” Madden said. “They’re going to be getting a player who will give everything he’s got and hates to lose.”

Although his announcement is only a day away, Madden insists he has not made up his mind yet. He’s not even sure how he’s going to eventually make his decision."

“I may just have Jakyran pick up a hat,” Madden said, referring to his nephew. “And that’s where I’ll go.”