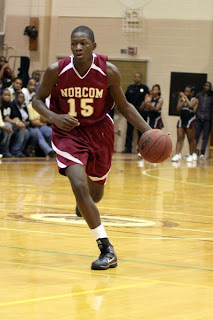 Dorian Finney-Smith had September 28 pinpointed as his decision day for several weeks, and he stayed true to his word, announcing his commitment at a press conference at I.C. Norcom High School (Va.).

The 6-foot-7 forward is heading to Virginia Tech.

“He liked it, and he had a great relationship with coach Seth [Greenberg],” Boo Williams, his AAU coach, said in a phone interview immediately after the commitment. “They recruited him early, they got on him early. That’s where he wants to make a career.”

“He’s a well-mannered kid, a good kid,” Williams said. “Before the spring, a lot of people didn’t know about him. But the end of the summer, everyone knew about him. He is a lot better than people thought he was.”

Finney-Smith is the headliner of a four-man class that includes forward C.J. Barksdale and guards Robert Brown and Marquis Rankin.

He chose the Hokies over Old Dominion and Florida.

“He wanted to do it right now, so he can enjoy the rest of his senior year,” Williams said. “I think he’s pleased with his decision, and happy to get it over with.”