Texas Tech gets another in-stater 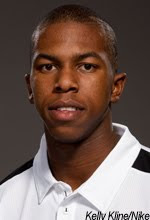 If anyone doubted Pat Knight and Texas Tech’s desire to make a splash with in-state talent, the past two weeks should have eliminated any questions.

The Red Raiders had already added three Texas prospects to the fold within the span of nine days, but they picked up the best of the bunch this weekend, as Toddrick Gotcher committed to Tech.

“I felt at home, the atmosphere was great and plus my family can come see me play,” Gotcher said. “Everything was great about Lubbock.”

Gotcher is a 6-foot-4 shooting guard from Lakeview Centennial (Tex.) who impressed us at the King City Classic despite being one of the lesser-known players at the event. He is athletic and can really shoot the three from distance.

He expects to immediately contribute for Texas Tech due to his offensive talent.

“I would make a big impact in the Big 12,” Gotcher said. “I believe my size is a plus and my scoring ability [helps].”

He chose the Red Raiders over West Virginia, San Diego, Baylor and USC, although he told us at King City that he had at least 14 offers.