Sampson visits Tennessee, down to four 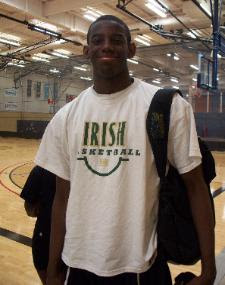 JaKarr Sampson was the subject of various Internet reports on Thursday morning. One stated that Sampson was set to announce his college decision today, while others had conflicting top-four lists for the rising senior at Brewster Academy (N.H.).

Sampson and Don Anderson, his AAU coach with the King James Shooting Stars, attempted to clarify everything.

Both denied the rumors that he was planning to make his college decision on Thursday, with Sampson adding that there was not even a timeline for his commitment.

As far as the final four on Sampson’s list, Baylor, Tennessee and St. John’s were the constants in the reports, with the fourth spot varying between Louisville and Kansas.

Anderson cleared it up.

“Louisville, but not Kansas, [is being considered],” he said.

The 6-foot-7 small forward from Ohio visited Tennessee on Wednesday, and he enjoyed his trip to Knoxville.

“It was real good,” Sampson said.

He met the coaching staff and academic advisors, and toured the facilities and campus buildings. “[It went] great,” Anderson said.

With Sampson leaving for Brewster tomorrow, it might be difficult for Sampson to make too many visits. In fact, Anderson said nothing else is planned right now.

With so much up in the air, there is very little certainty with Sampson’s recruiting process. It seems we could get a decision in the next week or not for another month or so.