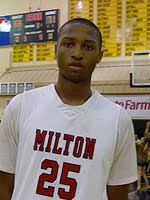 Julian Royal is getting closer to making a choice about his future.

He trimmed his list down in August, and has already begun to take his three official visits.

This past weekend, the 6-foot-7 forward from Milton (Ga.) tripped to Georgia.

“His visit at Georgia went very well,” Charles Royal, Julian’s father, said. “The staff was extremely nice and attentive. We all had a great time.”

Royal went on to detail some of the visit.

“He went to a class; saw a football game; had dinner with Mark Fox and his family; met the team; met the new AD and president; went downtown,” he said.

Despite the great visit to Athens, the elder Royal claimed that the Bulldogs were still equal to the other finalists: Georgia Tech, Wake Forest and Alabama. With that said, Alabama is the lone school that is not likely to get an official visit, meaning that this could be a three-team race.

Royal will visit Georgia Tech on Sept. 24 and Wake Forest on Oct. 8.

His father said a choice will likely be made in the next two months.

“No rush but we will probably make a decision before the early signing [period],” Royal said.