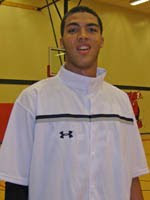 Braeden Anderson has had a well-traveled basketball career thus far, but his next stop clearly won’t be DePaul.

The 6-foot-8 Canadian native from Wilbraham and Monson Academy (Mass.) was released from his letter-of-intent to the Blue Demons earlier today.

“It was because of the Donovan Kirk transfer mostly,” Anderson said, referring to the Miami transfer DePaul recently picked up. “And because I wanted to go somewhere a little closer to Alberta.”

Anderson said that California and Virginia were his favorite options so far since he reopened his recruitment. He also mentioned UCF, Tennessee and Kentucky are all showing interest.

“Virginia is definitely not closer [than DePaul], but it’s a great school,” Anderson said. “Cal is my dream.”

He said he has four official visits remaining, and he wants to use at least one or two.

“I want to take a few visits before I commit,” Anderson said.

"Everything happens for a reason. And I'm excited for the near future."