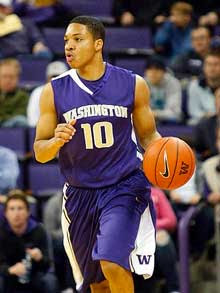 Two Pac-10 teams were negatively affected by the loss of their point guards today, one to injury and another to transfer.

First, Washington point guard Abdul Gaddy will miss the rest of the season after tearing his ACL in practice yesterday. Gaddy, a 6-foot-3 sophomore, was the Pac-10’s leader in assist-to-turnover ratio. He was averaging 8.5 points and 3.8 assists per game, shooting 40.6 percent from 3-point range.

Although Washington has plenty of talent on the perimeter, Gaddy at the point allowed Isaiah Thomas to focus on scoring off the ball, with Venoy Overton coming off the bench as a defensive pest.

Elsewhere in the conference, California freshman Gary Franklin has decided to leave the Golden Bears and transfer. The news was first reported by Jerry Meyer of Rivals.com on Twitter, and confirmed by Diamond Leung of ESPN.com.

Franklin was averaging 8.2 points this season, starting 11 of 13 games for Cal. He came off the bench in the last two games, although he did score 15 points in 30 minutes against Stanford on Sunday.

“Gary Franklin informed us [Tuesday] morning that he was interested in transferring and he has left the team,” head coach Mike Montgomery said. “We wish Gary well. We’re disappointed, but we wish him well.”

Expect Brandon Smith to continue starting at the point, with Jorge Gutierrez at the two and Allen Crabbe on the other wing.