With February soon upon us, it’s almost time for the stretch run in college basketball. We all know what that means – bubble talk, conference title races, key intra-conference match-ups, and NCAA Tournament discussion. It also means important games every night between either top teams in the conference, or between two teams trying to keep pace in the at-large hunt. There is no shortage of games like that this weekend, but there are also several intriguing non-conference contests to keep an eye on. With only a couple of football games to get in the way of quality college basketball, just sit back all weekend and bask in the hoops. 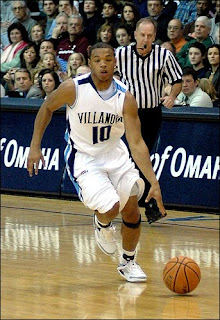 No. 7 Villanova at No. 3 Syracuse (Saturday, 12:00 PM, ESPN): Both teams lost on Monday, and are looking to bounce back with a win. The key could be Kris Joseph, who missed the Orange’s loss to Pittsburgh. Villanova might not have anyone to guard him. Prediction: Syracuse 76, Villanova 71

No. 1 Ohio State at No. 23 Illinois (Saturday, 12:00 PM, CBS): Ohio State looks to keep its undefeated season going on the road. Illinois’ big men aren’t the toughest of players, so it will be interesting to see if they keep Jared Sullinger off the glass. Prediction: Ohio State 69, Illinois 68

No. 22 Saint Mary’s at Vanderbilt (Saturday, 2:00 PM): Someone tell me how this game isn’t on television? Saint Mary’s has a terrific guard tandem in Matthew Dellavedova and Matthew McConnell, while Vandy counters with John Jenkins and Jeffery Taylor. Prediction: Vanderbilt 82, Saint Mary’s 75

Kansas State at No. 11 Texas A&M (Saturday, 2:00 PM, ESPN): Kansas State has completely fell out of the Big 12 race, and it needs a win here. Texas A&M got blown out at Texas during the week. Expect this to be a half-court battle with plenty of physical defense. Prediction: Texas A&M 63, Kansas State 59

No. 25 Cincinnati at St. John’s (Saturday, 4:00 PM, ESPN FullCourt/Regional TV): Both teams could use a win to shore up their resumes at this point. St. John’s was just obliterated by Louisville, while Cincinnati has lost three of its last four since starting 15-0. Prediction: St. John’s 70, Cincinnati 60

No. 10 Texas at No. 2 Kansas (Saturday, 4:00 PM, CBS): The weekend’s marquee game comes courtesy of the Big 12. Texas is coming off a big-time blowout of Texas A&M can the Longhorns give the Jayhawks a game on the road? Jordan Hamilton vs. Marcus Morris? I’m in. Prediction: Kansas 74, Texas 66

Marquette at No. 16 Notre Dame (Saturday, 7:00 PM, ESPN FullCourt/Regional TV): Notre Dame is tough to beat on its homecourt, but Marquette needs to start winning games if it wants to see its name on Selection Sunday. The Golden Eagles won the first meeting by 22. Prediction: Notre Dame 78, Marquette 71

No. 17 Michigan State at No. 14 Purdue (Saturday, 9:00 PM, ESPN): In the preseason, before Robbie Hummel’s injury, this was looked at as a game between two top-three teams. Michigan State is still looking to develop consistency; can it stop JaJuan Johnson? Prediction: Purdue 62, Michigan State 58 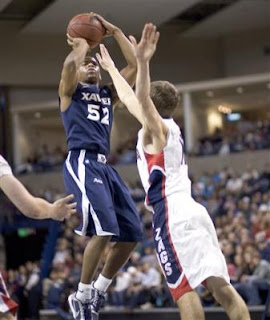 Temple at Xavier (Saturday, 3:00 PM, ESPN2): Two of the Atlantic-10’s best programs over the last several seasons, they’re also both near the top of the standings this year. Temple lost to Duquesne last weekend, while Xavier is turning things around. Prediction: Temple 71, Xavier 67

New Mexico at UNLV (Saturday, 4:00 PM, Versus): Both teams took a severe hit on Wednesday, with New Mexico losing to Utah on the road and UNLV getting blitzed at home by Colorado State. Which team will get the bounce-back victory on Saturday? Prediction: UNLV 79, New Mexico 70

Memphis at UAB (Saturday, 7:00 PM, ESPN2): Memphis may have salvaged its season with its huge comeback win at Southern Miss on Wednesday. UAB is currently 3-1 in Conference-USA, with the lone loss coming by 16 at Tulsa. Both teams have been up-and-down. Prediction: Memphis 78, UAB 73

No. 9 BYU at Colorado State (Saturday, 9:00 PM, Mountain): Any time to see Jimmer Fredette is must-watch TV. Colorado State beat UNLV by 15 on the road on Wednesday, so this one won’t be a cakewalk for the Cougars – they can’t look ahead to San Diego State. Prediction: BYU 76, Colorado State 68 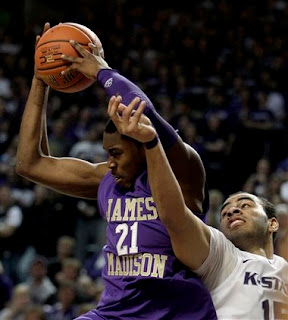 Hampton at Bethune-Cookman (Saturday, 4:00 PM): Two of the best teams in the MEAC square off. Bethune-Cookman is 5-0 in the conference, although most were close results. Hampton had a good non-conference session and is 4-1 within the league. Prediction: Bethune-Cookman 56, Hampton 54

VCU at Old Dominion (Saturday, 4:00 PM, Comcast Sports Group): Another big-time game in the Colonial. VCU is tied atop the league with Hofstra, while preseason favorite Old Dominion is just a game back. Expect high-intensity defense from both teams. Prediction: Old Dominion 66, VCU 62

Montana State at Montana (Saturday, 9:00 PM): Both teams are chasing 6-0 Northern Colorado in the Big Sky standings. Montana has won nine of its last 10 overall since starting 5-4, while Montana State is winners in five of its last six contests. Prediction: Montana 69, Montana State 62

Belmont at East Tennessee State (Sunday, 4:00 PM): Belmont is running away with the Atlantic Sun, but this could be a spot the Bruins slip up. ETSU is second in the standings at 7-1, and it has won eight in a row overall. Can dominating Belmont drop a game? Prediction: Belmont 83, East Tennessee State 70 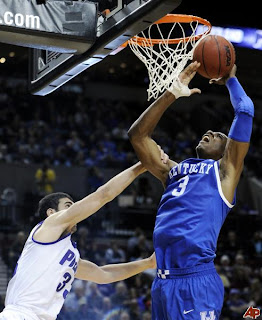 Clemson at Maryland (Saturday, 2:30 PM, ESPN FullCourt/Regional TV): After Maryland’s embarrassment at home against Virginia Tech on Thursday night, the Terrapins need to win. Clemson is on the outskirts of bubble country; a loss here would end it. Prediction: Maryland 82, Clemson 67

Oklahoma State at Baylor (Saturday, 4:00 PM, ESPN FullCourt/Regional TV): If either team wants to make the Big Dance, a win here is necessary. Oklahoma State has lost two of its last three, while Baylor was hammered by 30 at home against Kansas on Monday. Prediction: Baylor 79, Oklahoma State 70

No. 12 Kentucky at South Carolina (Saturday, 6:00 PM, ESPN): South Carolina was the forgotten team in the SEC this season, but the Gamecocks are 3-1 in the conference. Kentucky suffered a road loss at Alabama this week. A nice freshmen battle between B.J. Ellington and Brandon Knight will be fun to watch. Prediction: Kentucky 75, South Carolina 68

Iowa State at No. 13 Missouri (Saturday, 9:00 PM, ESPNU): Iowa State has lost three of its last four since starting 13-2 in non-conference play. Missouri bounced back from a three-overtime loss to Texas A&M with a blowout victory over Kansas State. Prediction: Missouri 84, Iowa State 71

Miami (Fl.) at North Carolina State (Sunday, 12:00 PM, ESPN FullCourt/Regional TV): Here’s a last chance for both teams to stay in the at-large mix in the ACC. Miami somehow lost to Florida State despite the ‘Noles making five field-goals in the first half, while NC State lost to Duke. Prediction: North Carolina State 76, Miami (Fl.) 66