Player of the Week: Ben Hansbrough 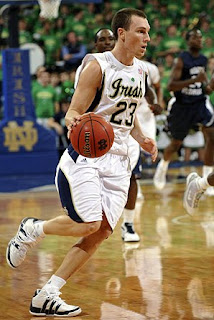 The first full week of games in 2011 brought dozens of impressive performances, from single-game dandies like Mike James’ 52 points off the bench to big-time weeks like Alec Burks’ 56-point, 16-rebound two-game numbers. Throw in Casey Mitchell of West Virginia and his 46 points in two road wins, and Trey Thompkins’ 25-point, seven-rebound line to lead Georgia over Kentucky and you have several candidates worthy for Player of the Week. Don’t forget Baylor’s LaceDarius Dunn and his 63 points in two games, either.

The best week overall, though, belonged to Ben Hansbrough of Notre Dame. Hansbrough, the former Mississippi State transfer and the younger brother of Tyler Hansbrough, had a great two-game stretch. He opened it up with 21 points, five rebounds and four assists in a win over Connecticut on Tuesday. Hansbrough played all 40 minutes and also played lockdown defense on Kemba Walker, forcing the nation’s leading scorer into an 8-for-23 shooting night. He followed that up with 26 points in a blowout win over St. John’s, which was one of the hottest teams in the country heading into the game. Hansbrough also threw in four rebounds, three assists and four steals to help the Fighting Irish to a 15-point win.

Hansbrough is now averaging 16.3 points, 3.7 rebounds and 3.9 assists on the season, hitting 44.6 percent of his 3-pointers – and ironically the same exact percentage of the field, too. He struggled for a bit during late November and mid-December, but he has clearly figured out his problems. Notre Dame has seven top-50 wins this year and will have a chance to make another statement with road games at Marquette and St. John’s this week.