Braeden Anderson has a favorite 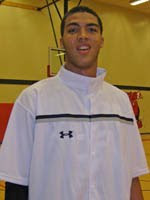 One of the more surprising players we saw during the school season was Braeden Anderson, a 6-foot-8 forward from Christian Faith Academy (N.C.).

The Canadian native will head to American Heritage (Fla.) next season for academic reasons, but his basketball prowess has led to an impressive school list.

“I want to go high-major,” Anderson said. “I’ve made it pretty clear that Miami is No. 1 right now. They’re 30 minutes away from my house and we have a great relationship.”

The Hurricanes, along with Texas-Arlington, VCU and Detroit, have offered Anderson.

He plans on taking official visits once he takes his SAT.

“I want to make a decision going into the school basketball season,” Anderson said.