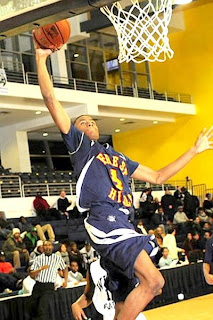 As recently as one month ago, Maurice Harkless was fully committed to Connecticut.

“He’s sticking with UConn, and I can see him curling off screens in Storrs,” a source said at the time.

Then, on June 21, Harkless decided to decommit – but was still heavily considering the Huskies.

“We believe the investigation [into NCAA allegations] is bogus, so that had no bearing,” said Nate Blue, an advisor to Harkless, on June 22. “He just wanted to open up some options.”

Now, the former Husky commit has completely eliminated the Big East school from his recruitment.

“When there are too many issues, I don’t know how to pick one,” Blue said Friday afternoon. “Look at this roster: Kemba Walker, Shabazz Napier, Jeremy Lamb, Jamaal Coombs-McDaniel, Niels Giffey, Roscoe Smith, Maurice Harkless – and they’re still trying to bring in another guard. None of those guys can play the four spot. Not one of them. So that’s like, eight guys on the roster who play the 1, 2 or 3.”

Blue also said that Connecticut’s switch from being a team led by big men who can block shots and rebound to a perimeter-oriented group was a key factor.

“I don’t think they have really improved enough to scare anyone,” he said. “I think they’re going ‘small’ and I’m not into small ball. They switched their style of play by switching their roster to a guard roster. We signed up for old UConn, not new. They turned into Villanova. He’s too talented to be Shane Clark.”

Another reason for Harkless eliminating the Huskies, according to Blue, was the uncertainty surrounding head coach Jim Calhoun’s future, despite the contract extension.

“Calhoun’s contract is retro[active], which means he’s got three years with Harkless,” he said. “So if coach leaves after two years, we are stuck with no idea who’s in charge, which leads to transfers. I just don’t see that roster making it to the NCAA Tournament.

“Those are some of the issues. But the list of problems is very long.”

Harkless, a 6-foot-8 forward from Queens who will play at South Kent Prep (Conn.) next season, has heard from Memphis, St. John’s, Maryland, Rutgers, Seton Hall, Arizona, Temple, Cincinnati, Xavier, Syracuse, Louisville and others since decommitting.