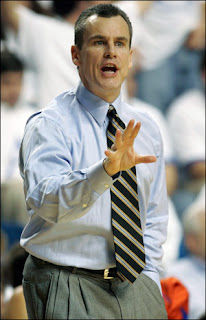 It is common knowledge that Florida has a national recruiting reputation, and this week is clearly proof.

In the past couple of days, the Gators extended offers to Dorian-Finney Smith, from I.C. Norcom (Va.); Nick Faust, out of Baltimore City College (Md.); and Maurice Harkless, a Queens native at South Kent Prep (Conn.).

All three have expanded their recruiting scope in a major way since the spring, and Florida head coach Billy Donovan is just the latest to jump in the mix.

Finney-Smith, a 6-foot-6 forward, already had the Gators in his final six. The offer helps their chances, he told me Tuesday afternoon.

When looking at the rest of his list – which includes Virginia, Virginia Tech, Maryland, Wake Forest and Old Dominion – it would appear that Florida seems out of place. Finney-Smith has a special connection to the Gators, though.

“Vernon Macklin,” he said in late May, referring to the Gators’ junior big man. “[He’s] my brother’s best friend; I knew him my whole life.”

Faust has been picking up offers left and right lately, getting ones from Kansas, Villanova and Tennessee last week, and then the Gators this week.

The 6-foot-4 shooting guard said he will strongly consider Florida, despite not knowing too much about the Gators at this point.

"I think it's a real good program and school," Harkless said. "Picking up this offer was big."

He also said the location wouldn't be much of a factor.

"I haven't even thought about that part yet, but I'm looking for quality schools that will fit me and Florida is a great school," Harkless said.

Since decommitting from Connecticut earlier this summer, his recruitment has really picked up.

“He’s a top ten kid,” Blue said. “And people are still hesitant, but he’s out outplayed all the top players he’s faced.”

With only Brad Beal committed for 2011, the Gators still have three scholarships to hand out. Will any of these three out-of-staters head south to Gainesville?