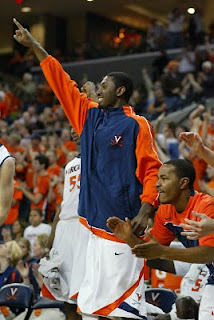 Tristan Spurlock came into his freshman season as a consensus top-100 recruit, choosing Virginia over numerous other high-major basketball powers. For a team that was returning just two-double figure scorers, it seemed clear that Spurlock would come in and make an immediate impact because of his scoring ability.

Instead, he appeared in just 13 games, averaging 4.6 minutes and 2.4 points in those contests. Moreover, he played a total of only 24 minutes in ACC games.

“The funny thing is everybody else, including me, thought the same thing,” Spurlock told me Friday afternoon. “Honestly, I feel like I didn’t get a chance to show all my talents at UVA. As a team, we struggled with scoring and I am a big-time scorer so I couldn’t understand why I didn’t play more, either.”

Not wanting to wait and see if he would get more playing time next season, Spurlock decided in late March to leave the Cavaliers and find a new school.

He said that an announcement on his next destination should be coming soon, and he is looking at schools in the Big East and Conference-USA.

“I’m looking for an up-tempo school where I can really use my size on the wing to take advantage of smaller players,” the 6-foot-8 swingman said.

Spurlock, who played for Word of Life Christian Academy in Springfield, Va. after going to Montrose Christian (Md.), insisted that location would not be a factor in his decision.

“It doesn’t matter,” he said. “From what I’ve seen, if you can play basketball, they will find you anywhere. I mean, Paul George went to Fresno State and he was a lottery pick.”

One of the main reasons for Spurlock’s transfer was the fact he saw himself playing the wing while others pegged him as a power forward because of his height.

“[I’m] polishing my wing skills at 6-8,” he said. “I am a true wing and I wanna make sure I show everyone that. I’ve been playing in the [Washington D.C.] Kenner [Summer] League and I had some good games so I’m just working on polishing everything.”

Spurlock holds no hard feelings towards head coach Tony Bennett and Virginia, saying that he learned a lot during his stint with the Cavaliers.

With that said, Spurlock is determined to show that he can make an impact at the college level by working tirelessly on his game this summer.

“Me and my dad work out everyday around 5:35 until about 7:30,” he said. “Working on everything from 3-point shots to off-the-dribble pull-ups, and I’m also working out with [renowned strength and conditioning coach] Alan Stein while I’m home for the summer; he really knows his stuff.

“With all my work that I’m putting in now and with all the work I’ll be putting in at my next school, there will be no doubts about playing time.”