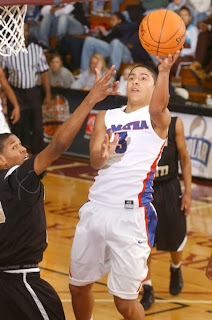 NORTH AUGUSTA, S.C. – The final day of the Elite Youth Basketball League/NIKE Peach Jam featured just four games, but two champions were crowned and one game was televised on ESPNU.

In the opening game of the day, one U-17 semifinal, the St. Louis Eagles knocked off Team Final behind 28 points from Brad Beal. Mike Gilchrist led Team Final with 26 points. In the other semifinal, Team Takeover overcame an early deficit to defeat Spiece Indy Heat by 15. Julian DeBose had a surprising 18 points and 14 rebounds, and held Marquis Teague to nine points on 3-for-12 shooting.

Up next was the U-16 championship between BABC and Georgia Stars. With Goodluck Okonoboh out with a sprained ankle, BABC did not look their usual self, but still kept it close. They had a chance in the final seconds, but L’Quan Arnum’s three-pointer bounced out and Rene Castro’s desperation shot at the buzzer fell short, giving the Georgia Stars a 59-57 victory. Marcus Hunt led the Stars with 19 points and nine rebounds, while Georges Niang had 25 points and eight boards for BABC.

The final game of the day was the EYBL Finals at the Peach Jam, and was televised on tape delay on ESPNU. It was a relatively evenly-matched game from the start, but the balance of Team Takeover started making the difference in the second half. Beal tried his best to keep the St. Louis Eagles in the game, but he was not enough. Takeover emerged victorious, 70-62. James Robinson led Takeover with 24 points and eight rebounds, while Michael Gbinije had 19 points. Beal had 26 points for the Eagles.

Rakeem Christmas, Team Final: Christmas continues to slide down the class of 2011 rankings. His physical tools and potential are outstanding, but he has yet to show he can consistently produce offensively. On the defensive end, he is one of the best shot-blockers in the country, and he is an effective rebounder at both ends of the floor. However, once he gets the ball with his back to the basket, Christmas struggles to score. He has limited post moves, and can’t face-up against defenders.

Aaron Brown, Team Final: Brown had not had a very good week going into the semifinals, but he turned that around against the St. Louis Eagles. He went for 17 points and five rebounds, with most of his baskets coming off of well-timed cuts to the basket leading to lay-ups. The 6-foot-4 lefty from Penn Wood (Pa.) is a strong player who can get to the basket and finish. However, he still is unable to consistently knock down jump shots. Once he can do that, Brown will be an effective Big East player at West Virginia.

Julian DeBose, Team Takeover: DeBose was one of the most surprising players I saw all day on Thursday. He impacted the game at both ends of the floor, guarding top-five guards Marquis Teague and Brad Beal in back-to-back games, making life difficult for both players. DeBose is long and athletic, using both attributes to be a very good rebounder for his size. He was active on the offensive glass and was also excellent in transition.

Darion Atkins, Team Takeover: Atkins made his biggest impact on Thursday at the defensive end of the floor. Despite standing only 6-foot-8 and 215 lbs., Atkins was able to hold his own down on the low block against Spiece’s A.J. Hammons. He was effective at denying entry passes to Hammons and also demonstrated the ability to block shots and get rebounds. Atkins hit a baseline jumper and also was able to finish in transition. Once he gains some weight and develops post moves, look out.

Antonio Wilson, Spiece Indy Heat: Although Wilson might not be the most talented forward on the court, he has a non-stop motor and never gives up on plays. He is very active on the offensive glass, creating second chances for himself and teammates. He constantly keeps the ball alive, chasing down loose balls or using his athleticism to get tip-ins and baskets. Wilson is aggressive in the paint at both ends of the court, and projects as a good mid-level guy.

A.J. Hammons, Spiece Indy Heat: Hammons has certainly improved since the last time we saw him, as he is developing into a solid big man prospect. His footwork has gotten better and his hands are good enough at this point. He had a nice dropstep move against Mikael Hopkins and also played well defensively against the Team Takeover big man. On the negative side, he lacks athleticism and needs to improve his lift. Furthermore, he has to be more aggressive once he gets the ball.

Georges Niang, BABC 16s: We have watched Niang before, and while he has always impressed us with his effort and energy, we didn’t think the Tilton (N.H.) product could be a high-major player until now. The kid is simply productive when it comes to scoring and rebounding the basketball. Niang plays hard at all times, outworking opposing big men and using his toughness and physicality to get baskets inside. He can finish with both hands, and also has nice post options and spin moves.  He is more athletic than most give him credit; he can block shots and play above the rim.

Marcus Hunt, Georgia Stars 16s: Although the Stars didn’t have as many stars (no pun intended) as some of the other U-16 teams, they have a host of players who can make an impact as mid-major-plus guys. Hunt is one of them, and he was outstanding in the title game. The 6-foot-5 North Clayton (Ga.) wing is a versatile offensive player, capable of shooting three-pointers from the perimeter or running the floor and finishing in transition. Hunt also has a mid-range jumper and can score when driving to the basket.

- Darion Atkins said he has offers from George Washington, George Mason, Wake Forest, Maryland, VCU and Pennsylvania, with interest from Georgetown, Syracuse, Wisconsin and Xavier. The 6-foot-8 Landon (Md.) forward plans on visiting Syracuse in the next week, and also wants to take a second trip to Wake Forest. Atkins said his top three at this point would be Wake Forest, Georgetown and Florida State.

- James Robinson’s stock is sure to rise after an outstanding week at the Peach Jam. Right now, though, he is hearing the most from Maryland, Georgetown, Notre Dame, Marquette, Virginia and Virginia Tech.

- Nic Moore had an excellent week shooting the three-point shot, and he could make an excellent guard at the mid-major level. Spiece Indy Heat coach Jared Quarles said Moore has offers from IPFW, Northwestern, Bowling Green and Indiana State, with interest from Michigan and Indiana.