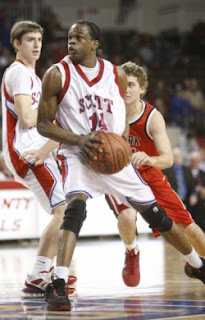 Ge-Lawn Guyn had an impressive spring, but he’s not waiting for the summer to make his college decision.

The 6-foot-2 guard committed to Cincinnati on Thursday, choosing the Bearcats over Baylor, Providence, Rutgers and Western Kentucky.

“The biggest thing was his family could see him play,” said Guyn’s uncle, Thomas Muhammad. “It is only 45 minutes from his house.”

Guyn, who is running with Team Indiana Elite on the AAU circuit, recently picked up an offer from the Bearcats after visiting their campus, and he clearly liked what he saw.

“He got along with the coaching staff and the players; they showed him a lot of love,” Muhammad said.

Guyn will do a prep year at Brewster Academy next season after playing at Scott County Senior High School (Ky.) this past season.

He was originally committed to Charlotte, but opened up his recruitment after almost immediately regretting his decision.

“I think he was star-struck after his visit,” Muhammad said. “He visited the Bobcats’ facility, and no one had ever treated him that well before. He called me after he committed and thought he made a mistake. He felt the same way a few days later.”

Despite offers and interest from several high-major schools, Guyn is somewhat underrated on a national level. As a result, his goal this summer is to make it clear he can make an impact in the Big East.

“He’s not one of the top-ranked kids, so he feels underrated. He belongs in the upper echelon of players,” Muhammad said. “He’s never been invited to LeBron or NBA camp, so he wants to show, you know, ‘I’m here.’”