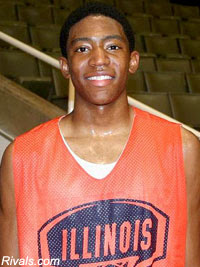 Chasson Randle, one of the highest-ranked point guards in the class, could be getting closer to making a decision.

“I will be cutting my list down to seven Tuesday,” Randle said. “But there are three schools who for sure are in and they are Illinois, Stanford and Purdue.”

Reports indicated that those three schools were his favorites, but Randle denied that, saying that they are the three coming at him the hardest.

Other schools that the 6-foot-2 Rock Island (Ill.) product is considering for his final list include Duke, Kansas, UCLA, Georgetown, Connecticut, Wisconsin, Iowa and Wake Forest.

“The interest level of the school and staff,” Randle said when asked what would be the major factors in his decision. “The opportunity to play, and winning tradition.”

He said he would wait until he trims his list to plan any visits.