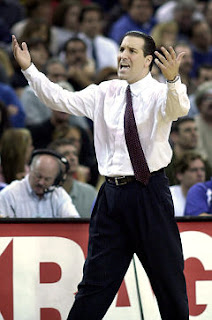 CLEVELAND – Not surprisingly, one can easily make multiple all-star teams with a list of players from the New York/New Jersey area over the past few seasons.

However, in what has become something of a disturbing trend – for metro-area basketball junkies, at least – none of those players ended up at a New York or New Jersey college.

“The game is national and global for these guys,” said Dave Telep, National Recruiting Director for Scout.com. “Getting on a plane is nothing to kids in that area. [It’s a] tough area to recruit because everyone views it as open and neutral.”

With St. John’s, Seton Hall and Rutgers each hiring new head coaches -- Steve Lavin, Kevin Willard and Mike Rice, respectively -- in the offseason, though, it is a trend that will have to turn around in order for the three metro-area schools to be successful.

“That’s the most important thing we’re trying to do,” said Shaheen Holloway, the associate head coach at Seton Hall. “If you look at all the good teams, they keep their players home. Plus, I think we have the best players around, between New York, New Jersey. And I think keeping players home every year can be good because the area is that good with players. Plus, if you keep kids home, other players see that and want to come.”

St. John’s assistant coach Tony Chiles said it is imperative for successful teams to keep the top talent in the region at home.

“If you’re not solid at home in major cities, it makes it tough to maintain your program,” Chiles said.

Part of the problem facing these three programs is the lack of success they have experienced over the past several seasons. St. John’s has not reached the NCAA Tournament since 2002 and has not won a regular-season conference championship since 1992. Seton Hall has made only three NCAA Tournament appearances since 1994, while Rutgers has won just 22 Big East games total in the past six seasons.

Talented kids with national recruitments and reputations would rather go elsewhere and have a chance to compete for conference and national championships than potentially suffer through mediocrity at one of the local schools.

“National is the new local in that area. Too many schools like fishing in those waters,” Telep said. "[The] hard part for a new coach is you need [in-state kids] to win, but they want to see it first.”

Chiles said the schools have to change the state of mind of the local prospects in the area.

“Of course we want to keep the best players in the area home,” he said. “We want to show them that they can do all the same things here that they can do in other places, with their families and friends at every home game.” 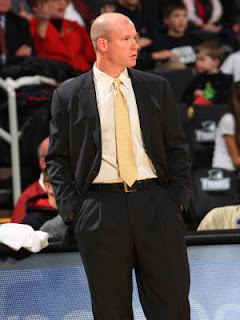 Holloway is the perfect example of a top prospect deciding to stay home rather than go away to school. The former Seton Hall point guard was the MVP of the 1996 McDonald’s All-American game and one of the top backcourt players in the country.

While he did have a national recruitment, Holloway ultimately decided that staying in New Jersey was the best place for him.

“Keeping kids home will be good for the state, and the kids,” he said. “They get a chance to play at a high level and still have their friends and family watch them play. That’s why I stayed home and played. The support was great from family and friends. It’s the best of both worlds.

“Plus it can help them after they’re done playing. Look at me: if I did not stay home, there’s a good chance I would not be coaching at Seton Hall. Just one of the many reasons to stay home.”

One school that has already made an impact in the area with the new staff is Rutgers. The Scarlet Knights were able to convince St. Benedict’s (N.J.) forward Gilvydas Biruta to stay when former coach Fred Hill was forced to resign in April, and then also picked up St. Benedict’s (N.J.) product Mike Poole, a 6-foot-6 swingman originally from Queens.

“I think it certainly helps,” Rutgers assistant coach Jimmy Martelli said when asked how the signings will be a step in the right direction. “[Poole] is a terrific kid with big upside and is well-liked and knows a ton of players who all want to play with him, we hope. Gilvydas will be big in people wanting to play with him, as well.”

Martelli said it is going to be very important for the new Scarlet Knights’ staff to make inroads with local prospects right off the bat.

“I think perception, really,” Martelli said. “[We] need to keep them here, at least to start our regime, [to] show we are loyal and want them, but again they have to be good enough and luckily, there are enough in N.Y., N.J. We need to get those kids and not just because they are talented, but there is usually a certain toughness and swagger about them we want.”

With the New Jersey Playaz, an AAU powerhouse based in Paterson, N.J., filled with five or six high-major prospects for the class of 2011, and a multitude of other talented uncommitted players in the area, the new staffs will need to have an immediate impact with the local players. 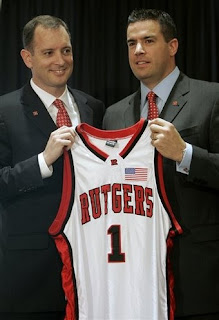 Myles Davis, a 6-foot-1 guard from St. Peter’s Prep (N.J.) who runs with the Playaz, is already seeing a difference in his recruitment as a result of the coaching changes.

Other players said the coaching changes would not have much of an effect on their recruitment.

Kyle Anderson Sr., the father of Kyle Anderson, one of the top prospects in the class of 2012, said he has a good relationship with each of the three programs, but what matters will be how hard each school works.

“I think all three have very good leaders and so it will come down to who outworks who,” Anderson Sr. said. “We really have not spoke on that, as far as staying close to home or going away.”

New coaching staffs always face issues when taking over a major-conference program, although developing relationships with coaches and players in the area might be the biggest one.

In New York and New Jersey, though, those sorts of relationships matter more when it comes to being successful. As demonstrated by the lack of success over the past decade from St. John’s, Seton Hall and Rutgers, keeping players at home could be the difference between running a program with constant winning tradition or constant coaching turnover.

“[We’re] really just trying to change the mindset, and we are working to get local talent to see our vision,” Chiles said.

Note: This article was originally published at NBE Basketball Report.