Bennett gets his man 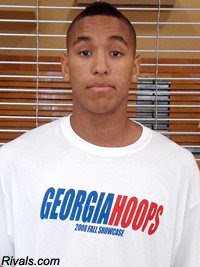 At the NIKE Peach Jam in July, Malcolm Brogdon caught the eyes of most coaches and programs around the country.

One coach, in particular, who immediately was drawn to Brogdon was Virginia’s Tony Bennett.

Bennett has been hot on the trail of Brogdon since July, and on Monday, his hard work paid off when the 6-foot-4 guard from Greater Atlanta Christan School (Ga.) committed to the Cavaliers.

“The main reason was that it’s a program on the rise, and I had a great relationship with coach Bennett,” Brogdon said over the phone Monday. “I’m also developing one with the rest of the staff, so once I realized that, I [chose Virginia].”

Given Bennett’s interest level throughout the summer, it was not difficult for Brogdon to gauge his reaction when he broke the news to him of the commitment.

“He was super happy,” Brogdon said. “He told me they’ll need me, and I’ll have to play some minutes as a freshman.”

Brogdon’s reputation increased considerably at the Peach Jam event in North Augusta, S.C., when he stood out in the backcourt for the Georgia Stars. He is a strong offensive player who can create his own shot in the mid-range and knock down three-pointers with consistency.

He said he did not play any differently than usual at the Peach Jam; it was simply a matter of exposure.

“People just got to see me play, and that’s why my stock rose,” Brogdon said.

Brodgon, who chose Virginia over Vanderbilt, Harvard, Minnesota, Georgia and Clemson, is confident he will be able to contribute right off the bat.

“If I work hard, I can make a big impact,” he said. “I can help in a lot of areas, shooting, going off the dribble, rebounding the ball.”

In this day of decommitments and reopening recruitments, Brogdon seems set on playing in Charlottesville.