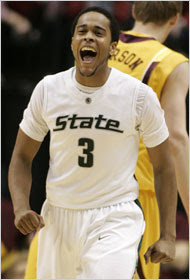 Iowa State picked up highly-touted transfer Royce White from Minnesota in July, and the Cyclones could be on their way to getting another big-time transfer.

Michigan State guard Chris Allen, who was dismissed by head coach Tom Izzo in early August, took a visit to the Ames campus Monday, according to a source.

The source also indicated that Connecticut and Notre Dame were also in the mix, while reports have stated that Allen is looking at St. John’s, UTEP, South Florida, Baylor and others.