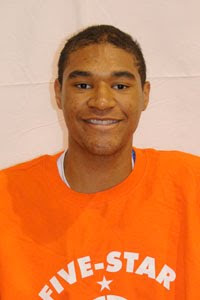 Pittsburgh’s recruits seem to know where they want to go well before they announce their decision.

Last week, Durand Johnson popped for the Panthers after making it clear that they were his favorite for the past year.

“The level of interest was the biggest thing,” Gilbert said over the phone Monday night. “They were always calling my dad and my AAU coach, and the interest was mutual.”

He said he made his decision last night, and notified Dixon earlier this afternoon.

“Virginia and Pitt were neck and neck,” he said. “My sister was saying Pitt, my mom was saying Pitt, but even with that, it was difficult. It was a difficult decision because Virginia was great, both athletically and academically. But I went with Pitt.”

Gilbert is a very long and athletic post player who is ready to make an immediate impact at the defensive end of the floor. He will fit in well with Pittsburgh’s emphasis on that side of the ball.

“I’m a big man, a five, who runs the floor and plays really great defense. I have touch around the basket,” said Gilbert, who also made it clear where he will make the most impact. “Definitely defense. I’m an aggressive shot-blocker and I love running the floor. Those are my strengths.”

Gilbert will take his official visit to Pittsburgh’s campus the first week of September, but said he is set on going to Pitt despite deciding before his trip.

He added that it was a very tough decision, but Dixon’s enthusiasm and interest clinched the decision.

“He was excited, I was excited,” Gilbert said. “The feeling was mutual. I mean, I couldn’t see his facial expressions, but he was excited.”