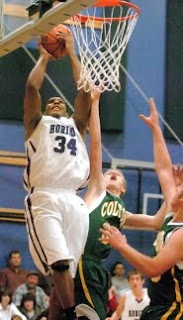 One of the most impressive players we watched at the Tournament of Champions in North Carolina at the end of May was Jordan Tebbutt.

The 6-foot-5 small forward from Tualatin (Ore.) was quickly rising up the rankings, before suffering a thumb injury that kept him out for most of the July live period.

Unfortunately, he will now be out an additional eight weeks, as his father informed me on Thursday that Tebbutt will have surgery on his hand tomorrow to repair a Bennett’s Fracture in his right hand.

“He’s already talking about left-hand drills and general conditioning,” Brad Tebbutt said. “I’m just glad he has a positive attitude on it.”

Despite teams not being able to see Jordan on the AAU circuit during the second half of July, his recruiting has nonetheless cast a wide net. He currently holds offers from USC, UCLA, Arizona, San Francisco, Portland, Utah, Oregon, Oregon State, Washington, Washington State and Virginia, with strong interest from Maryland, Texas, California, Arizona State and Colorado.

“North Carolina and Kansas came to watch this summer, but got to see him injured on the bench,” Brad Tebbutt said. “But they are showing interest.”