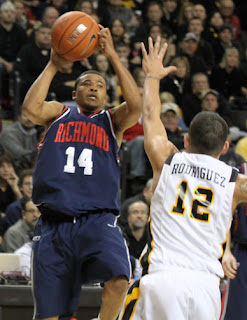 The Atlantic-10 went through a roller-coaster regular season in which it went from having six projected bids to the NCAA Tournament at one point to earning three on Selection Sunday. There was also a great race for first-place in the standings between Xavier, Temple and Richmond, with the Musketeers and Owls finishing tied at 14-2, and the Spiders ending up one game back. Saint Louis was a second-half spoiler and went 11-5, while Rhode Island and Charlotte finished 9-7. Dayton was 8-8. The conference tournament saw Temple and Richmond advance to the title game, with Temple escaping with a win by four points. In the NCAA Tournament, Xavier made a run to the Sweet 16 before losing in an epic game to Kansas State, while Temple and Richmond suffered upsets in the first round. Dayton won the NIT, and Saint Louis lost in the finals of the CBI. Look for another battle for bids in the Atlantic-10.