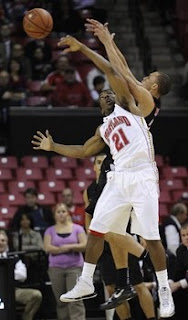 Over the past few years, there have been a couple of freshmen point guards to announce their arrival on the national scene immediately.

There was Syracuse’s Jonny Flynn hitting a deep 3-pointer to beat Saint Joseph’s in the 2007 NIT Season Tip-Off.

There was John Wall last year, going coast-to-coast and hitting a step-back jumper with 0.5 seconds left to beat Miami (Ohio).

And now there is another freshman point guard following in their footsteps – and it is not Kyrie Irving or Brandon Knight.

“It’s great,” Howard said Thursday by phone. “I talked to John Wall last week, and it’s just really good. It’s only the second game of the season, though, with about 30 games left. So I’m just trying to get better.”

The Los Angeles native who played at Oak Hill Academy had the best moment of the young season on Wednesday night, when he nailed a mid-range jumper with 4.6 seconds left to beat Charleston, 75-74.

“I was just trying to get a good shot,” Howard said. “I knew I could either pass, or get a foul. But I had an open shot and I took it.”

“He never flinched and that is hard to do for a freshman,” head coach Gary Williams said after the game.

Howard has been a key factor for the Terrapins in their first two games, dishing out eight assists in the opener against Seattle and finishing with 14 points and four assists in Wednesday’s battle.

“The first game I was nervous,” he said. “I couldn’t stand in one place, but I settled down at halftime. I think we all did, we picked it up towards the end of the game. We started out sluggish, and we did again last night.”

On the last couple of possessions, though, Howard showed the confidence of an upperclassman. He knocked down a 3-pointer to get the Terrapins within striking distance in the final minute, then hit the game-winning shot.

His poise stems from his performance in summer workouts and his smooth on-court attitude.

“Ever since the summer, when we were playing pick-up, I’ve been confident,” Howard said. “I think the guys have noticed that since then. My game is maturing, and I wanted the ball in my hands [on the last play]. I stay aggressive and don’t worry about mistakes, and just try to stay prepared.”

Howard flew under the radar during his high school days, not ranking in many top-100 lists or garnering constant recruiting coverage.

Despite that, his composure and demeanor while playing for Oak Hill could have tipped people off to his tremendous start in college.

“It’s a completely different game, but it prepared me,” Howard said. “I had to take shots in big games.

“People mature at different stages, and my last year at Oak Hill, I was getting better. At the end of the year, I guess we’ll see if I was underrated.”

Although he came off the bench in the first two games of the season, it might not be too long before Howard gets a spot in the starting lineup. If he continues to play like he has, it will be impossible to keep him off the court.

“He is a great point guard,” Williams said. “I really trust him, and he has confidence in himself.”

After last night, Williams and the rest of the Terrapins have confidence in Howard, too.