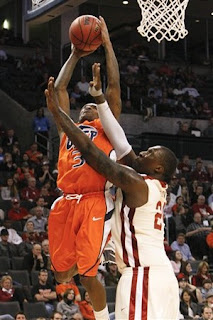 Last year was expected to be the year that Conference-USA was no longer Memphis’ playground. Well, that was both true and false. Sure, the Tigers lost three games and didn’t win the conference, but they still went 13-3 and finished in second-place. On the other hand, surprising UTEP won its final 14 games en route to a 15-1 C-USA record and regular-season championship. UAB and Marshall finished 11-5, while preseason favorite Tulsa was down in fifth place at 10-6. The league tournament saw Houston make a surprising run to the automatic bid, knocking off UTEP in the title game. UTEP ended up making the NCAA Tournament also, although both Houston and the Miners lost in the first round. I hope the rest of the league had fun last year – Memphis is back on top.