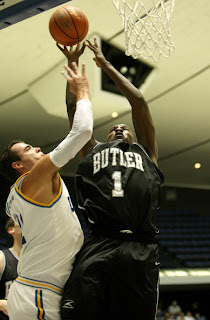 Not surprisingly, the Horizon League did not feature a semblance of a conference race last season. Butler ran through the conference undefeated, with 12 of the 18 Horizon wins coming by double-figures. There was quite a battle for second place, as Wright State shrugged off a 4-4 start to win eight of its final 10 league games and get a double-bye. Four other teams finished above .500 in the league, with a talented Detroit team going 9-9. Butler left no doubt in the conference tournament, destroying Wright State by 25 in the title game. We all know what happened in the NCAA Tournament: the Bulldogs made a run all the way to the championship game before losing to Duke when Gordon Hayward’s half-court heave at the buzzer rimmed out. Expect much of the same in the Horizon this season.