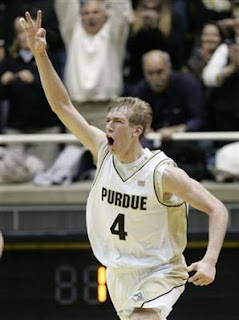 In order to win a championship, everyone thinks guard play is necessary. That is true, but a team won't win without a solid frontcourt. If you have a post player that will get you a basket with the clock winding down, it gives you an advantage over smaller, guard-laden clubs. Rebounding and defensive stops down low will come easier if you have a good group of players in the paint. The best backcourts in the country will falter early in March without a solid duo or trio on the baseline. Who has the best frontcourts headed into the season? Starters in italics

1. Purdue (Robbie Hummel, JaJuan Johnson, Patrick Bade): According to my position rankings, the Boilermakers have the top-ranked power forward and center in the country; not surprisingly, they have the best frontcourt, too. A healthy Hummel combined with Johnson is going to be a load for any opponent to handle.

2. North Carolina (Harrison Barnes, John Henson, Tyler Zeller, Justin Knox): This one depends on the development of Henson and Zeller and the impact of Barnes. Barnes has a chance to be the best player in the country, while Henson and Zeller have yet to dominate as much as their potential would indicate. Knox was a key transfer.

3. Duke (Kyle Singler, Mason Plumlee, Miles Plumlee, Josh Hairston, Ryan Kelly): Singler might be the best returning player in the entire country, and the Plumlee brothers will step into the starting lineup to replace Brian Zoubek and Lance Thomas. Don’t underestimate those losses, but there is clearly a talent upgrade in the frontcourt.

4. Kansas State (Curtis Kelly, Jamar Samuels, Wally Judge, Freddy Asprilla): The Wildcats have plenty of interchangeable parts up front. This could be the year Kelly plays to his potential and dominates, while Samuels will get a chance to start this season. Judge is on the verge of a big year, and FIU transfer Asprilla will be the X-factor.

5. Florida (Chandler Parsons, Alex Tyus, Vernon Macklin, Patric Young): The Gators return an excellent trio in Parsons, Tyus and Macklin, yet it is Young who has everyone excited. He was one of the best post players in the high school ranks, and he has a chance to join the starting lineup. Parsons is one of the most clutch players in the country.

6. San Diego State (Kawhi Leonard, Malcolm Thomas, Billy White, Brian Carlwell, Tim Shelton): Easily the most underrated group in the country, the Aztecs have athleticism and versatility galore. Leonard is one of the best forwards around, while White is an efficient scorer. Thomas is the team’s best athlete and can also defend well.

7. Illinois (Mike Davis, Mike Tisdale, Jereme Richmond, Bill Cole, Meyers Leonard): Tisdale and Davis are veterans who have started for three years under Bruce Weber. They will both return for another shot at the NCAA Tournament. Richmond will likely start at small forward; he can score and pass very well. Leonard could be a future pro.

8. Georgia (Trey Thompkins, Travis Leslie, Jeremy Price, Marcus Thornton, Chris Barnes): With the talent the Bulldogs have in Thompkins and Leslie, it’s almost a guarantee that they will improve their 14-17 record from last season. Thompkins is one of the best post players in the country, while Leslie is a dynamite athlete who can also rebound effectively. Thornton was a coveted freshman who will make an impact.

9. Kentucky (Terrence Jones, Enes Kanter, Eloy Vargas): Although this group is made up entirely of newcomers, don’t underestimate them. Jones is a versatile forward who can play well at both ends of the floor, while Kanter has lottery pick potential (although he has yet to be cleared for this season). Vargas has to be ready for a big role.

10. Gonzaga (Elias Harris, Robert Sacre, Mangisto Arop, Kelly Olynyk): Harris is developing into one of the best forwards in the country, while Sacre just needs consistency to be a dominant big man. With the loss of Matt Bouldin in the backcourt, both players will need to step up their scoring and overall play.

11. Ohio State (Jared Sullinger, Dallas Lauderdale, DeShaun Thomas): Since the Buckeyes will likely start four guards – or at least three wings – it is not determined how many of these players will be in the starting lineup. One thing is for certain, though: Sullinger will man the low block from day one. He is a dominant big man.

12. Syracuse (Rick Jackson, Fab Melo, Kris Joseph, DaShonte Riley, James Southerland, C.J. Fair, Baye Moussa Keita): This is a deep and versatile group that has ceiling-less potential. Jackson returns as a bruiser, while Joseph gets a chance to shine in the starting lineup. Melo will start from opening day at center; he is one of the top freshmen in the country.

Kansas: Marcus Morris is looking to take the next step towards stardom this season, while his brother, Markieff, will have to improve his game, too.

Vanderbilt: Jeffery Taylor is one of the more underrated forwards in the country, while freshman Rod Odom could be a surprise impact player.

UCLA: Sophomores Reeves Nelson and Tyler Honeycutt have the potential to have breakout seasons this year, while freshman Josh Smith is a top recruit.

Texas: Despite the loss of Damion James and Dexter Pittman, Rick Barnes is fine up front. Tristan Thompson and Jordan Hamilton are supremely talented.

Dayton: Chris Wright and Chris Johnson form a dynamite forward tandem. Wright is a human highlight reel, while Johnson is looking to stay healthy this season.

Tennessee: Freshman Tobias Harris will be the leader of this group, but Brian Williams returns to man the post. Transfer John Fields and Jeronne Maymon are key.

Michigan State: Draymond Green is one of the more difficult match-ups in the Big Ten, and Delvon Roe is trying to get through a season completely healthy.

New Mexico State: This is one of the most productive trios in the country. Wendell McKines and Hamadu Rahman are double-double threats, and Troy Gillenwater can score.

North Carolina State: Tracy Smith and C.J. Leslie are going to create match-up problems due to their skill sets, while Richard Howell will provide more punch off the bench.

Baylor: This group will block plenty of shots and finish tons of dunks down low. Quincy Acy is on the verge of a breakout season, and Perry Jones is a talented frosh.

Wisconsin: Another frontcourt duo that creates match-up nightmares, Jon Leuer and Keaton Nankivil are both inside-outside forwards who can pick and pop.