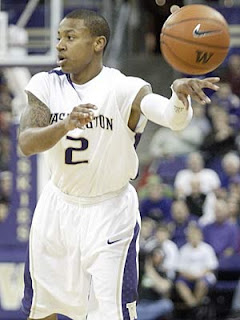 Every national championship team has that one player that they can go to with the game on the line and he will come through in the clutch. Florida was an anomaly with balanced distribution during the Gators' back-to-back title run, but someone who can score down the stretch is an important ingredient in March. Last year, Nolan Smith was the third-leading scorer for Duke, but he made the big plays down the stretch. Guys that can get baskets in the closing seconds are imperative for successful teams. Here are the top 15 go-to-guys in the country. (Note: This is not a ranking of the top players in the country -- rather, it is a ranking of these players' dependability and ability in crunch time)

1. Isaiah Thomas, Washington: The diminutive guard's quickness makes him nearly impossible to keep out of the lane.

2. Kalin Lucas, Michigan State: Was hampered for much of last season, but his quickness is hard to corral for a defender.

3. Nolan Smith, Duke: He has a great first step and can get to the rim or knock down mid-range and perimeter shots.

5. Jacob Pullen, Kansas State: If you need a reminder of how clutch he is, watch the double-OT game vs. Xavier last season.

7. Shelvin Mack, Butler: Gordon Hayward is not around to make big shots anymore, but Mack is more than capable of filling that role.

8. Josh Selby, Kansas: If he is cleared to play, Selby’s aggressiveness and explosiveness will take the Big 12 by storm.

10. Harrison Barnes, North Carolina: I'm not sure who is going to be able to guard Barnes in the ACC; he is a nearly impossible match-up.

11. Corey Fisher, Villanova: Will take over end-of-game responsibilities from Scottie Reynolds; is very tough to keep out of the lane.

12. E’Twaun Moore, Purdue: The Boilermakers struggled offensively at times last season, and Moore needed to carry them on his back.

13. Randy Culpepper, UTEP: Combine his electrifying athleticism with his willingness to shoot, and he needs to be guarded at all times.

14. Chandler Parsons, Florida: Might be the most clutch player in the country, as evidenced by his game-winners against NC State and South Carolina.

15. Alec Burks, Colorado: He drew rave reviews all summer, and will need to put the Buffs on his back to bring them to the Dance.