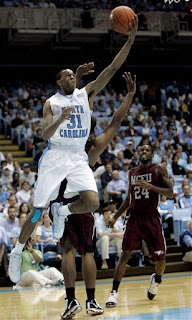 Every season, there are players who were role players the year before who improve greatly the next season and end up being a star. Sometimes, it is the work they put in over the summer, and other times, the players just did not get the opportunity the year before. Either way, here are 12 players who could make the jump and have an outstanding season.(Note: The only stipulation is that the player could not have averaged more than 20 minutes per game, or started the majority of his team’s games.)

John Henson/Tyler Zeller, North Carolina: This is just too easy. Both Henson and Zeller will start in the frontcourt from day one, and will get all the opportunities to produce at a high level.

Glen Rice Jr., Georgia Tech: If he wins the starting job on the perimeter next to Shumpert, look for his shooting prowess and defensive ability to get him plenty of minutes and chances to have a big year.

Mason Plumlee, Duke: He's the more talented of the two Plumlee brothers, and he will get a chance to jump right into the starting lineup after making the most of his minutes last season.

Reggie Johnson, Miami (Fl.): Johnson averaged 13.7 points and 8.0 rebounds in the ACC Tournament, and has the potential to be a dominant rebounder. Put up numbers in limited minutes.

Wally Judge, Kansas State: Showed flashes of his potential last season, but will need to show consistency in order to get starter minutes. Averaged 5.4 points and 5.4 rebounds in the NCAA Tournament.

Jordan Hamilton, Texas: This is borderline cheating, as Hamilton averaged 19.9 minutes per game last season. Either way, he is going to be one of the top scorers in the Big 12 due to his versatile offensive ability.

Peyton Siva, Louisville: Siva is going to be handed the keys to the offense and will run it from day one this season. He is a crafty passer and is an unselfish, pass-first point guard. He needs weapons, though.

Dante Taylor, Pittsburgh: Taylor struggled for much of last season after scoring 13 points in the season opener. However, he is the most talented player in the Panthers’ frontcourt and could be poised for big numbers.

Maalik Wayns, Villanova: Either Wayns or fellow sophomore Dominic Cheek will start on the perimeter, and we’re betting on Wayns. He can get to the hole on nearly any defender, but needs to stay under control.

Casey Mitchell, West Virginia: Averaged nearly 14 points in the first three games last season, but struggled mightily the rest of the way. However, word out of West Virginia is that he’s going to put up points.

Angel Garcia, Memphis: Only played 12 games and 112 minutes last season, but still managed to score 6.8 points in those 12 games, including 27 points in only 31 NIT minutes. With more time, his numbers could skyrocket.

Lamont “Momo” Jones, Arizona: The replacement for Nic Wise at “Point Guard U,” Jones is a physical player who has good quickness and shooting ability. He will be a key if Arizona is to return to the NCAA Tournament.

Melvin Goins, Tennessee: Goins scored 15 points in the team’s NCAA Tournament opener against San Diego State, and will be the starter now. He is an aggressive defender and a very quick offensive player.