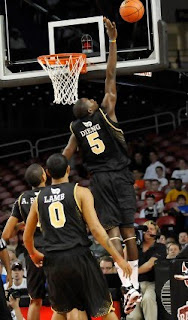 First, Roburt Sallie and Justin Coleman were ruled ineligible due to academic issues. Then, freshman Russ Smith injured his ankle and will be miss eight to 12 weeks.

There have been rumors swirling around Dieng for several weeks, and it seems we have finally reached a conclusion. Or have we?

We spoke to Dieng’s former coach at Huntington Prep (W.Va.), Rob Fulford, who shed some light on the situation.

“[It has to do with his] African transcript,” Fulford said. “NCAA said he finished high school in Senegal, [but] he didn’t, so they then said he didn’t graduate on time [because of the] 8-semester rule. They appealed, but not sure where it is.

“[He] graduated here! They are saying he should have graduated over there. His last African transcript said 11th grade. It is obviously very confusing.”

Dieng, a 6-foot-10 forward who came over from Senegal, was expected to be the Cardinals’ best newcomer. With so many players out, Pitino will begin the season with only five players who averaged double-figure minutes last season, and without his top four newcomers.

Fulford hopes everything ends up working out for Dieng.

“It is sad for the kid,” he said. “He turned down a pro contract in France to come here and finish high school and play college basketball.

“He scored an 810 and didn’t speak English when he arrived in the USA. [He] had a 3.3 here. My [European] kid at Iona was cleared in three days. It’s sad how selective they are.”