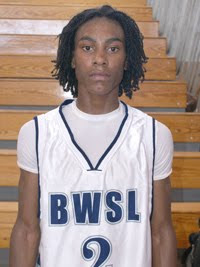 When watching Anthony Barber on a basketball court, it’s hard not to notice his nose for the basketball and his energy.

Not surprisingly, Barber gets a lot of his aggressiveness from another sport.

His father said that he is playing well so far during his sophomore; more importantly, he is improving.

“He’s playing real good,” he said. “As his father, I always think he can upgrade, but his skills are better. His goal is to just bring it to them.”

As far as recruiting, Anthony’s father admits it’s very early in the process.

With that said, he did say that nearly everyone is coming at his son right now. When we spoke with Anthony at the NIKE Peach Jam, he mentioned Virginia Tech, North Carolina and Kentucky as three schools that were showing interest.

“The home state teams are coming at him the hardest,” his father said, presumably referring to Virginia and Virginia Tech.

His father said Anthony plans to take his time with the process.

“I might check some [schools] out, but I’m not pushing my son,” he said.