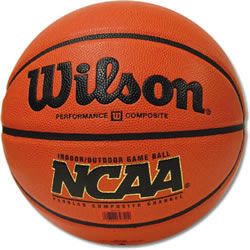 At the 11:38 mark of the first half, Oakland was beating Illinois, 15-6. A surprising start for the Golden Grizzlies, sure.

But when checking out a live-blog from the game, one notices something slightly more surprising. And by slightly, we mean, insanely.

For the first 7:22, Illinois and Oakland played with a women’s basketball.

Yes, you read that correctly. For more than seven minutes, no one noticed that the two teams were using the wrong basketball. Mike Tisdale was the only one who notified head coach Bruce Weber and then the referees.

It was lucky for the Illini that Tisdale realized the mistake.

However, the Fighting Illini turned it around once the men’s basketball began being used. They went on to outscore Oakland, 68-48, the rest of the way, and shot 22-of-45 from the field in the final 21:38.

"At first it was working in our favor. Illinois wasn't making that many shots," Oakland guard Reggie Hamilton told Jeff Eisenberg of Yahoo! Sports. "Maybe we should have kept it."

It seems like Greg Kampe and co. should try to sneak in a women’s ball against Michigan State on Saturday. Well, with the way the Spartans are playing, they might not need it.