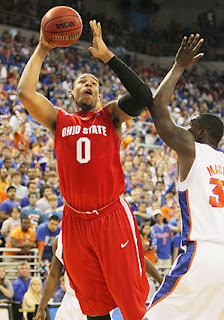 Over the years, we have seen several stars step up or dedicate their performance to a loved one who recently passed away.

Add another one to the laurels.

Hours after paying his last respects, Sullinger put up 40 points and 13 rebounds in a 75-64 comeback win over IUPUI. The 40 points set an Ohio State freshman record. 26 of those points came in the second half, many of them as a result of his 16-of-23 performance from the free-throw stripe.

“That was for you Uncle Brief,” Sullinger tweeted after the game. “I love you dude.”

With Kyrie Irving possibly missing the rest of the season, Sullinger’s emotionally-laden performance might have pushed him to the head of the national freshmen pack.