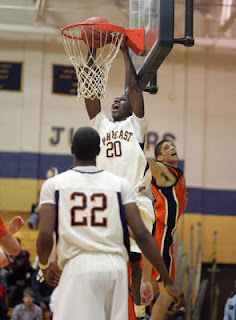 One of the fastest-rising players last summer was Alex Poythress, a player who is just scratching the surface of his potential.

Poythress is a versatile frontcourt player who is still expanding and refining his offensive game, but is a menace on the glass and can defend effectively.

“Schools started paying more attention to me when I performed well,” he said. “I was doing what I’ve always been doing, but coaches started to see once I started doing it a lot – and better.”

More importantly, Poythress knows he has the capability of getting better.

“There’s always room for improvement,” he said on Tuesday.

The 6-foot-8 power forward from Clarksville Northeast (Tenn.) said his team is struggling so far this season, but they are continuing to get better in practice.

“I know Virginia was there recently,” he said when asked what schools have stopped by to watch him. “Vandy and Memphis and Austin Peay were there too.”

Although he also holds offers from Cincinnati, Miami and many other schools, the six he mentioned were Florida, Georgia, Tennessee, Vanderbilt, Stanford and Memphis

“I haven’t really narrowed it down yet,” Poythress said. “I’m still all open right now.”

Poythress, who holds a 3.8 GPA, is interested in a school with good academics, player development and coaching staff.

He has taken trips to Georgia, Florida, Tennessee and Vanderbilt so far.

“They were all good,” he said. “I like those schools a lot.”

He has no more visits planned, and is taking his time with his recruitment.

“I’m just going through the process and I want to take my official visits,” Poythress said. “But I want to make my decision before my senior year of ball.”