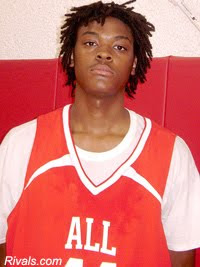 Elijah Macon made waves last spring when he backed off his commitment to West Virginia. However, little has been heard from the 6-foot-8 Marion-Franklin (Ohio) product since then.

When we caught up with him back at the Boo Williams EYBL, Macon said he just wanted to “see what else is out there.”

Now, the junior forward has seen the other options and is going through his recruitment for a second time.

Cincinnati, Tennessee, Marquette and Dayton are currently pursuing him, as well as the school from which he decommitted, West Virginia.

Macon said West Virginia, Cincinnati and Tennessee are coming at him the hardest.

“I’m going to make a top-five after this season,” he said.

Macon recently took an unofficial visit to Xavier. “It was alright,” he said. “I just walked around campus with the coaches and my mom.”

He might take an unofficial visit to Tennessee next week.

“[I’m looking for] a team that likes to run non-stop and just a good environment,” Macon said.

Although the season is young, Macon has been doing his best to keep his name out there.

In front of coaches from West Virginia and Cincinnati, he put up 19 points and 11 rebounds in his first game, followed by a 20-point, 12-rebound performance in his second outing.

“I bring energy,” Macon said. “Once I get going I think I’m unstoppable.”