Stokes closing in on decision 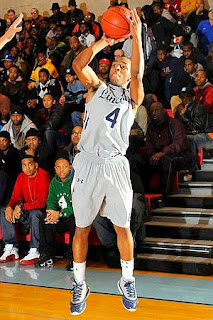 Followers of New York City basketball have heard the name Shaq Stokes for what seems like a decade.

Well, the 6-foot point guard is only a few weeks away from ending what has been a wide-ranging and unpredictable recruitment.

“After I sit down with my family and coaches,” Stokes said. “Might be late January or early February.”

Iowa’s Fran McCaffery and an assistant came to watch Stokes on Tuesday, while TCU, UNLV, Colorado State and Hofstra have also offered.

While he insists he has no favorites, Stokes said that he wants to visit TCU and Iowa next month.

“Looking for a family environment and great academics,” he said.

As for the current campaign, Stokes has led Lincoln (N.Y.) to a 6-0 record, including a win Thursday night over Boys and Girls, a team many pegged as the top team in the city. Stokes went for 20 points and six assists.

“The season is going great so far,” he said. “The team is playing well, from the starters to the bench.”

Stokes is averaging 18 points and six assists on the season.