Be patient with Barnes, UNC 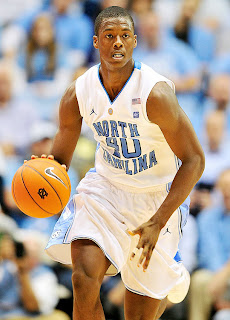 After last season’s debacle in which North Carolina went 16-16 before making a run to the NIT championship game, Tar Heel fans needed a savior.

Luckily for them, that came in the form of Harrison Barnes, the first freshman since to be named to the Preseason All-American team. Barnes was ranked No. 1 by nearly recruiting website and scouting service, and rightfully so.

Unfortunately, Barnes has been a “disappointment” to many observers, including an Illinois crowd that specified an “overrated” chant to the freshman on Tuesday.

What makes things ever worse is North Carolina’s performance this season: the Tar Heels are just 4-3, with losses to Minnesota, Vanderbilt and Illinois. In those three defeats, Barnes is averaging 8.3 points and 5.3 boards.

Will it get better? Of course.

Barnes is far too talented to not become a go-to-guy by the end of the season – although that might be in the NIT yet again for the Tar Heels. He is an unbelievable offensive player who can beat players off the dribble and finish strong at the basket due to his 6-foot-8 frame and impressive athleticism. Barnes can also knock down perimeter shots, although he is extremely adept at making defenders pay in the mid-range game. He is also a very solid passer, as evidenced by his two dimes per game. Barnes has the length and lateral ability to be a very good defender, as well.

Just give him time.

I saw Barnes in high school too many times to believe that this is actually his ceiling for his freshman year. To be honest, his personality and maturity may be part of the reason he is not putting up big numbers.

While he is demonstrating difficulty beating defenders who are as long and athletic as him – as evidenced by his 0-for-12 shooting against Minnesota – he is not the type of player who is going to ignore the offensive system and try to get his own shot. Barnes is going to defer to the upperclassmen and let the game come to him.

Roy Williams has never been a system coach; he relies on talent. This year, he has seven McDonald’s All-Americans, but they’re struggling because there’s not much of an offensive game plan. That certainly doesn’t help Barnes. With Tyler Zeller and John Henson down low, the ball is going to the post as the first option. However, neither is an adept passer, meaning that Barnes isn’t getting open shots once Zeller or Henson is double-teamed on the block.

Williams needs to insert some offensive sets that get Barnes open shots and enable him to get some easy baskets in the mid-range or at the rim. Barnes is hitting his shots from the free-throw line; he is just not getting there enough. In other words, Barnes is spending too much time on the perimeter as opposed to utilizing his talents to their potential. 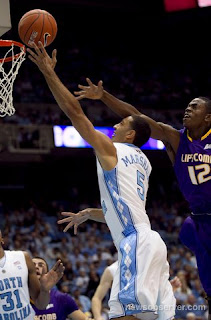 It’s also not entirely Barnes’ fault. North Carolina ranks in the bottom third of the nation in turnover percentage and its three primary guards – Larry Drew II, Dexter Strickland and Kendall Marshall – are all averaging at least two turnovers per game. Moreover, those three players have knocked down a combined seven 3-pointers in seven games.

Without any perimeter shooting threats, defenses can sag off Barnes and clog the lane, making it nearly impossible for him to get into the paint and make plays. In high school, he was an inconsistent 3-point shooter and that has carried over to college. Unless a guard steps up and forces opponents to actually come out and guard the arc, Barnes is going to struggle with penetration.

That brings me to my next point – when will fellow freshmen Kendall Marshall and Reggie Bullock be inserted into the starting lineup?

I said since Day One that Marshall, Bullock and Barnes should have been the three perimeter starters for North Carolina. Instead, Williams has trotted out the Larry Drew/Dexter Strickland that led North Carolina to the Promised Land last year – if the Promised Land was a .500 record after the ACC Tournament and a 5-11 campaign in conference play.

Marshall is not your prototypical North Carolina point guard. He is not going to get from one baseline to the other in four seconds like Ty Lawson, nor is he going to be the guy that can beat his defender off-the-dribble at will. However, the lefty is a tremendous passer with outstanding court vision who will be able to run the offense far better than Drew has. In about 10 minutes fewer per game, Marshall is averaging more points, assists and fewer turnovers than Drew and is also shooting better from both inside and outside the arc. 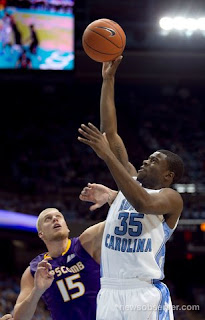 Bullock is a scorer, and not much more. That is not a negative, though – this Tar Heels team needs guys on the perimeter who can put points on the board. No one in the lineup besides Barnes can create his own shot or even poses a danger to the defense on the perimeter. Bullock would provide that. The 6-foot-7 shooting guard is averaging 8.5 points in just 14.5 minutes, including three double-figure performances in the first four games. Moreover, he is hitting 50 percent from the 3-point line and has the most 3-pointers on the team – remember, he is only playing about 14 minutes per game.

Tuesday’s game against Illinois was a microcosm of North Carolina’s season so far. The Tar Heels had more turnovers than assists, knocked down just five 3-pointers and the non-bigs got to the free-throw line only 11 times. The guards showed zero aggressiveness in trying to get to the rim, and the transition game that Roy Williams and North Carolina are famous for simply wasn’t there.

North Carolina’s season isn’t over yet – and neither is Barnes’ candidacy for All-American. Just be patient.