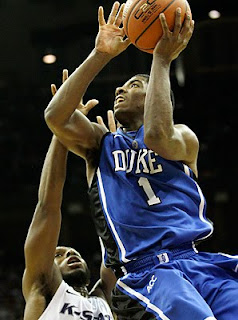 As college football winds down and December heats up – or, cools down, I guess – it is the perfect time to start Busting the Bracket’s Player of the Year. This week, there were several noteworthy performances, including Chris Wright of Georgetown, who averaged 21 points and six assists and hit the game-tying shot against Missouri; Virginia’s Mike Scott, who averaged 19 points and 12.5 boards in road wins at Minnesota and Virginia Tech; Purdue’s JaJuan Johnson, who scored 29 in a win at Virginia Tech and averaged 23 and six boards on the week; and of course, Kemba Walker, who notched a triple-double against UMBC after dropping 30 against New Hampshire.

However, the most important performance of the week belonged to Duke’s Kyrie Irving, who showed upperclassmen maturity and talent in wins over Michigan State and Butler. The 6-foot-2 freshman guard from New Jersey poured in 31 points against the Spartans, carrying the Blue Devils for stretches. Irving knocked down 3-pointers, knifed into the lane and got to the free-throw line. Against Butler on Saturday, Irving struggled with Ronald Nored in the first half, but rebounded to score 17 points in the second half, finishing with 21 on the day. For the week, he averaged 26.0 points, 4.0 rebounds and 3.0 assists.

Irving is now averaging 17.4 points, 3.8 rebounds and 5.1 assists on the season, hitting nearly 90 percent of his free-throws and shooting 45.2 percent from 3-point range. He has been a primary catalyst in Duke’s 8-0 start, and the main reason many people think the Blue Devils can go undefeated. High expectations for a freshman, sure, but he’s living up to all the hype.