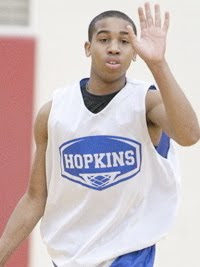 Despite being a top-20 point guard by most accounts, one of the more underrated prospects on the circuit all summer was Siyani Chambers.

Chambers is a lefty speedster who loves getting out in the open floor and leading the fast break. He adjusts speeds effectively and can find teammates in transition, while also showing an ability to score at the rim or in the mid-range.

With the school season underway, Chambers is looking to keep the positive momentum going.

“It’s going good. We are working hard as a unit to get better everyday,” the Hopkins (Minn.) product said. “I’ve been playing alright.”

He is not sure which schools have come to watch him play so far.

“I don’t know,” Chambers said. “When we have a game, we try to focus on the task at hand and not worry about who’s watching.”

In terms of visits, he has taken trips to Butler, Notre Dame and Central Michigan.

“I liked them all,” Chambers said. “No one school stood out more than the others. Right now I’m wide open.”

The 6-foot-1 jet said he is looking for a school with a good combination of academics and basketball.

Said Chambers: “I do not have an exact time, but I will probably be making a decision by the end of this summer or by the beginning of next year’s high school basketball season.”