Justin Jackson has plenty of suitors 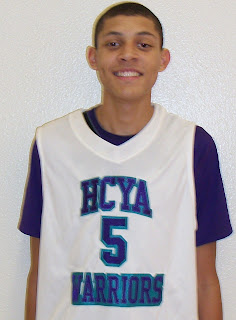 The Houston Hoops program has been a hotbed for college prospects over the years, and the next big-time prospect out of the area is likely to be Justin Jackson.

Jackson, a long and athletic guard from HCYA (Tex.), is a match-up problem due to his height and skill set. He can shoot from 3-point range and also finish in traffic around the basket. Jackson is also deadly with his mid-range shot and has terrific basketball IQ and knowledge of the game.

Even though he’s just a sophomore, it comes as no surprise that college coaches are constantly on hand to watch him this season.

Jackson said Texas, North Carolina, Texas A&M, Baylor, Oklahoma and Washington have already stopped by for a game or practice this year.

Unfortunately, Jackson is not content with his team’s performance.

“It’s going pretty well, not as well as I would like,” he said. “Individually I’m doing well, but the team isn’t doing as well as expected.”

Colleges have not let that slow down their recruitment of Jackson, though.

In addition to the schools that have watched him, he said he has also received interest from Marquette, Georgetown, Miami (Fl.), Utah, Stanford, George Mason and Kansas.

Despite so many suitors, Jackson has not really started the recruiting grind yet.

“It’s so early in the process,” he said. “I want to leave all options open and hope to attract more before I narrow them down.”

Jackson said he might take a couple of unofficial visits when the calendar turns to 2011, but he has not decided which schools he wants to check out.

“I’m just trying to stay focused on my game and getting better,” he said.